For the second month in a row, Saskatchewan is leading the nation in year-over-year growth in the two key indicators of manufacturing sales and wholesale trade.

"The strong Saskatchewan economy continues to grow and lead the country," Trade and Export Development Minster Jeremy Harrison said.  "These significant double-digit growth rates in manufacturing sales and wholesale trade - and both by a wide margin over the provinces with the second highest growth rates - shows our province is open for business and we are poised to further increase our exports around the world." 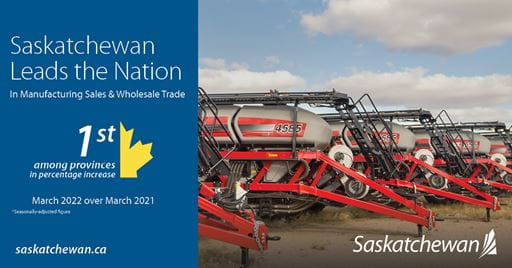 In March 2022, the value of wholesale trade in Saskatchewan increased by 28.9 per cent (seasonally adjusted) compared to March 2021, which was first in terms of percentage change among the provinces.  The increases in year-over-year wholesale trade were led by the farm products, food and beverage, and miscellaneous merchant wholesalers categories.