Investigation into CPS officer-involved use of force causing injury continues

Verbal efforts to disarm the male proved unsuccessful, and the male advanced towards one officer. The officer discharged his service weapon several times, striking the male and causing him to collapse. Shortly afterward, the man was taken into custody with the assistance of the Calgary Police K-9 Unit. Emergency Medical Services transported the male to a Calgary-area hospital for treatment. The male sustained significant injuries during the encounter.

Two edged weapons were recovered from the scene. 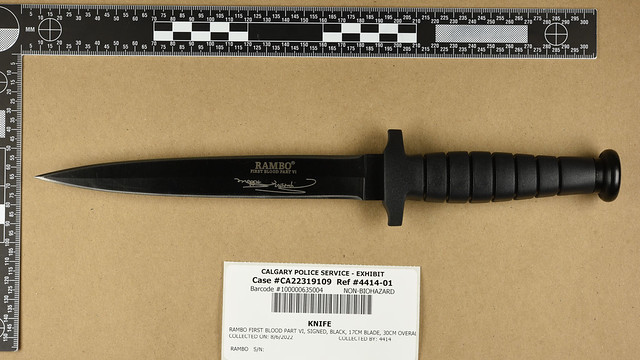 One of the edged weapons located on scene

ASIRT’s investigation will examine the circumstances surrounding the use of force. No additional information will be released.

ASIRT’s mandate is to effectively, independently and objectively investigate incidents involving Alberta’s police that have resulted in serious injury or death to any person, as well as serious or sensitive allegations of police misconduct.

This release is distributed by the Government of Alberta on behalf of the Alberta Serious Incident Response Team.