Following an Indigenous ceremony and protocols, provincial crews will place the pair of about five feet high by about 12 feet wide signs along the four-lane highway near Bladworth. Motorists travelling north will see the Treaty 6 sign. Motorists travelling south will see the Treaty 4 sign. This section of Highway 11 sees more than 5,000 vehicles daily. "I am grateful to the Office of the Treaty Commissioner and the Government of Saskatchewan for working together to officially mark Treaty boundaries along our province's major highways," Saskatchewan's Lieutenant Governor Russ Mirasty said. "It is important recognition of our treaties."

"The Government of Saskatchewan is proud to play a role in being the first Canadian province to mark a Treaty boundary along a major provincial highway," Minister Responsible for First Nations, Métis and Northern Affairs Don McMorris said. "The treaty boundary signage, in partnership with the Office of the Treaty Commissioner, complements Treaty education in our province to continue moving forward together towards meaningful and lasting reconciliation efforts in Saskatchewan.”

"It is common sense to acknowledge the Treaty boundaries by the province and by the federal government," Treaty Commissioner Mary Culbertson said. "This first sign acknowledging the Treaty 4 and 6 boundary is paid for by the province. It is going to spark dialogue and lead to policy changes. It is education! There are Treaties 2, 4, 5, 6, 8 and 10. These Treaties were here before this province was created - before these roads were here. We will work with our Elders and the knowledge keepers advisory council to ensure that other Treaty boundaries that cross provincial highways will be marked with signs in the coming years." 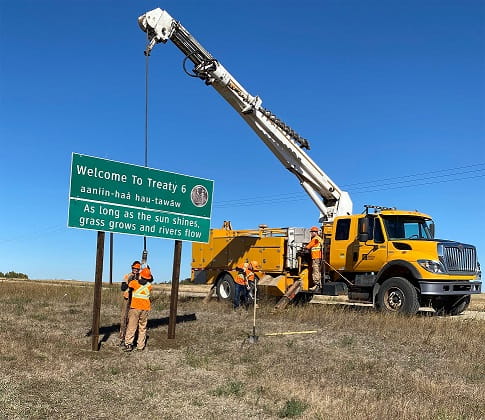 Saskatchewan is the first Canadian province to mark a Treaty boundary along a major provincial highway. To watch a video of crews installing the signs, once completed, visit https://www.facebook.com/SaskatchewanHighwayHotline/.